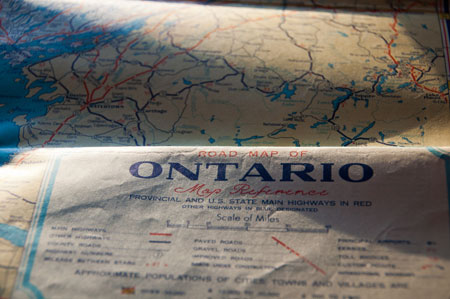 In the early 20th century the invention of the automobile and it’s affordability for the average family created a new opportunity for those who had lived most of their lives in and about the community where they were born. New horizons opened and road trips in the family automobile became a reality. Regulations were created to govern the licensing of drivers and the registration of motor vehicles. A new network of roadways suitable for the passage of cars began to grow slowly. Those early travelers were faced with challenges that today are easily dealt with by plugging in a GPS device for directions. The early motorists needed help in knowing how to get to their destination. 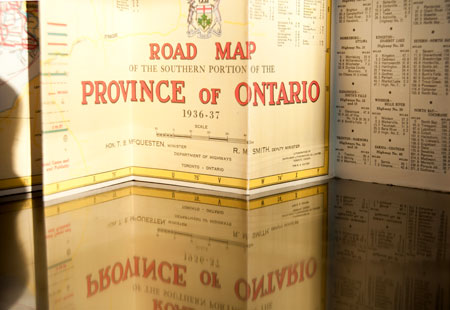 In an attempt to provide a solution for the lost traveler, both governments and gasoline companies began producing and distributing maps. Oil companies hoped to win the loyalty of the traveling public with perks such as clean restrooms, excellent pump side service and maps to help with reaching your destination. This trend continued until the economic relaties of the 1970’s brought an end to the free distribtuion of maps.

Welcome to my website – Ontario Road Maps. This site has grown from a hobby that started many years ago when I would rummage through the glove box of my father’s car and save old copies of maps that he had picked up at different locations. The collection has grown considerably over the years with lots of trading and purchasing of new additions to the collection.

I have organized the site in a relatively easy fashion to navigate about. Enjoy browsing through the maps I have collected and those that have been shared with me by other map collectors. 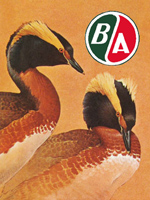 There is a wide variety of hobbies that people become involved in. Map collecting may seem odd to many, but for others it is a passion. One thing that map collecting shares with other hobbies is a comradeship with fellow collectors. Whether a collector is located in Georgia, Ontario or British Columbia most collectors have a focused goal. That could be collecting oil company maps from their state or province, acquiring maps with birds on the cover or something as simple as collecting maps from anywhere that were printed in the year they were born.

My goal has been to acquire maps that portray Ontario. That can include Official Maps produced by the province, oil company maps and any others that I come across. The acquisition of maps through purchasing has become more and more expensive like many other things. The high costs of some maps is often prohibitive and I simply can not afford a map I would like to share with other on this site. While browsing through my site, if you see that I don’t have a particular map and you do, perhaps you would consider sharing images of it so all can enjoy it. I initially began my website in 2006 and redesigned it in 2012. The original site had 64,000 hits prior to this site coming online – so there certainly seems to be an interest in the hobby.

The dark days of World War II shadowed over Canada and brought about national pride as the entire country turned it’s resources to fighting the evil that was gripping the world. A symbol that represented the terror that the Nazi’s were inflicting upon the people of Europe was the swastika. Previously the swastika was a symbol of good fortune but with it’s intimate association with Nazism the symbol became to represent evil. A conflict developed during World War II between the people of the Town of Swastika, Ontario and the provincial governent as an attempt was made to rename the town “Winston”. See how the conflict was played out on Official Ontario maps. Click HERE.
Home Page 2An Encounter with Tim Horton Himself

One of the most delightful emails that I have received over the years was from Brian Mifflin. He related a story as follows; I was 10 years old at the time and was with my Dad getting gas at the BA station on Plains Road East at Sanford Drive in Burlington Ontario. We noticed this guy talking to the dealer Ralph Bowron. My Dad said, ” That’s Tim Horton!” I replied it looks like him but the guy is wearing glasses. My Dad said yes but he doesn’t wear them playing hockey. He urged me to go and ask him if he was Tim Horton and if I could get his autograph. It was him! The dealer was kind enough to get me a roadmap to write it on. Tim had been discussing the possibility of buying the empty lot next to the station to put up a new store. He was driving a station wagon at the time. He eventually bought a lot a block away on Plains Road in Burlington at which a Tim Horton’s store still remains today.

I went to the Grand Opening of that store on Plains Road in Burlington and met Johnny Bower & Frank Mahovlich, as well. I did a little research and I think that may have been the 2nd or 3rd store. I read online that Tim Horton and Ron Joyce actually built the first store themselves, and a school teacher was walking her class on Ottawa Street in Hamilton when they (Tim & Ron) were digging the foundation. Apparently she told them to keep in school and study hard or that would be them digging ditches in a few years! Little did she know.
Home Page 5
All Things B-A

We are fortunate to have many collectors that contribute to our webpages on a regular basis. One such contributor is John Buckberrough. He has collected many things related to the British American Oil company and has shared photographs, magazine articles and maps with this website. Navigate to the BA Maps page and you will see links for some of the articles that John has provided. Included in the links is information on artist J. F. Lansdowne who painted covers for BA road maps that were published from 1963 until 1967. (That is a Lansdowne cover that Tim Horton signed in the story above). If anyone is interested in contacting John, there are also email links provided on the BA Maps page.
Wilbert B
A Snapshot in Time – Art Gloyne’s Shell, Kingston, ON

Back from about 1953 until 1961 a young fellow named Wilbert Bertrim worked at a Shell Station located at Princess and King Streets in Kingston, Ontario. The station was owned by Art Gloyne. Eventually Wilbert had a daughter who married a man named Bill Walraven. Bill has a noteworthy collection of maps and has contributed many map scans to this web site and his help is appreciated. Bill’s father-in-law provided the 1954 Shell cover which is on this site and actually stamped the Art Gloyne station stamp on the cover himself. Click HERE to have a look at the map cover and see a couple of photos from Wilbert with his memories of the pictures – truly snapshots of a moment in time.